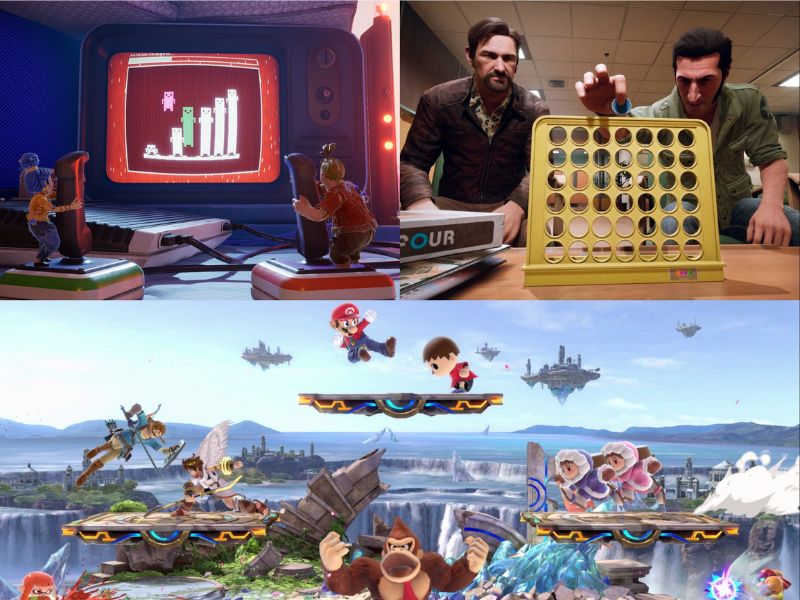 Contents hide
The Best Games For 2 Players To Check Out
1. It Takes Two
2. A Way Out
3. Overcooked: All You Can Eat
4. The Dark Pictures Anthology
5. Super Smash Bros. Ultimate
6. Unravel Two
7. Rocket League
Don’t Play Alone, Share Good Times With These Great Games For 2 Players

What are your best gaming moments? For yours truly, some of the best gaming moments are the ones enjoyed with someone sitting next to me. We enjoyed our “me time” gaming alone and multiplayer sessions with the gang, but the experience hits different when we play alongside a player two. There will be fun banters, much teasing, and tight teamwork that elevate the experience in many ways. Games made for 2 players are, unfortunately, few and far between when compared to the glut of single-player and multiplayer titles. But we did some digging and found these gems!

The Best Games For 2 Players To Check Out

Whether you are playing with your best buddy, significant other, or sibling, these games for 2 players will guarantee a good time.

Winner of The Game Awards’ Game Of The Year 2021, It Takes Two is a must-play for those seeking a thrilling action-adventure game with best-in-class cooperative gameplay mechanics. You and your partner will need to combine wits and skills to overcome all the challenges. And believe us when we say there are a whole lot of them to keep you thoroughly entertained.

At the heart of this game is a heartfelt tale of two divorcing parents who are forced to work together to restore order for the sake of their daughter after they found themselves magically turned into ant-sized clay dolls.

Ever felt like having your own Prison Break moment? Check out A Way Out, an intense co-op adventure game that puts you and your gaming partner in the shoes of two prisoners attempting a daring escape. You two will need to work hand-in-hand together to overcome all obstacles on your path to freedom. There will be prison guards to slip past, fellow inmates to brawl with, and thrilling car chases!

Available on: PC, PS4, Xbox One

Want to put your friendship/relationship with your gaming partner to the test? Then Overcooked: All You Can Eat (which contains the first Overcooked and Overcooked 2) is that litmus test game for 2 players! The popular title tasks players as chefs managing increasingly out-of-control kitchens to fulfil as many customer orders as possible. You will need to coordinate with your partner to the best of your abilities to clear the rounds, which get increasingly frantic and chaotic. Expect lots of shouting and screaming, but all in the name of good fun.

Watching horror films alone can be a terrifying experience, but where’s the fun in that? Similarly, the fun is multiplied when you play a horror game with some company. What if instead of merely watching each other play, you and your gaming partner get to actively participate in a horror adventure together? The Dark Pictures Anthology (a collection of horror games) allows the two of you to experience the spine-chilling stories together in Movie Night Mode, with each controlling a different character. The decisions made in-game will affect how the story unfolds. And yes, your character will die if you’re not careful!

The Dark Pictures Anthology: Man of Medan (Available on: PC, PS4, Xbox One)

When we think of games for 2 players, we often think of fighting games. If you’re in the mood for some old-school button-mashing contest, we couldn’t recommend Super Smash Bros. Ultimate highly enough. The popular Nintendo Switch game features 89 playable fighters/characters from some of the most famous franchises, including Super Mario, Pokemon, Final Fantasy VII, and Sonic The Hedgehog. Want to pit Pikachu against Cloud Strife or Ryu (from Street Fighter) against Pac-Man? This is the only game where all the dream matchups can happen!

Unravel Two is a gorgeous-looking puzzle platform game that centres on the journey of a pair of Yarnys—small beings made of yarn and connected by a single thread. With a local co-op mode, two players can control each of the Yarny as they navigate breathtaking and lush environments that are also teeming with dangers in their adventures. With the connected-thread element, it features unique gameplay mechanics including swinging through the air and catapulting through the world.

Car racing and football titles are also staple games for 2 players. Did you know there exists a game combining the two and is free to play? In Rocket League, you play a game of football with rocket-powered vehicles instead of human players. As absurd as it sounds, the game gets millions of log-ins daily! It is one of the few games today that still offer a split-screen co-op mode, so you and your gaming partner can indulge in some wild vehicle-soccer mayhem on the same couch!

If you want to try something different after endless hours of single-player gaming and online multiplayer sessions with your buddies, look no further than these games made for 2 players. Rope in a gaming partner and pick any of these games that strike your fancy (or play them all!). We guarantee they will leave you both craving for more. As the famous quotes go, “two heads are better than one…” and “good things come in pairs!”

For more game recommendations that you can enjoy with more people, check out these best multiplayer mobile games and free online games to play with friends.