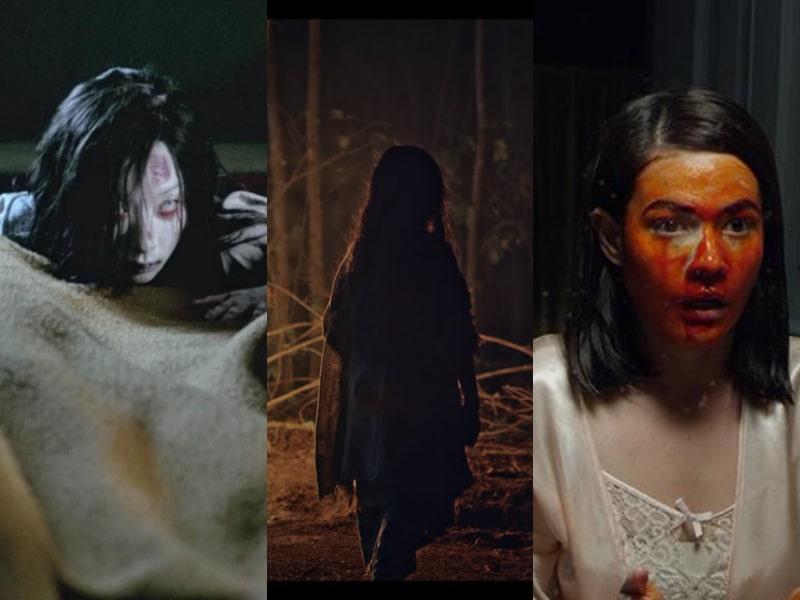 Call us biased but we think the most bone-chilling horror movies come from Asia. After all, the region is steeped in creepy folklore and tales of mystery, so it’s only natural that filmmakers take inspiration from these points to carve their paths of horror. From slashers to psychological thrillers, these scary movies on Netflix will wound you up in the best (or worst) way possible. We won’t fault you for sleeping with the lights on.

After a young woman is killed in a hit-and-run accident at the hands of a photographer, mysterious figures begin appearing in his photos. Soon enough, the images unravel in real life, prompting a series of ominous events that result in deadly consequences. Shutter is highly acclaimed in the Asian horror movie circuit. Almost two decades later, it’s still chilling as ever.

Fancy a dash of romance in your horror viewing? Then Inhuman Kiss is for you. Here’s a quick summary of the story: A teenage girl is caught in a love triangle with two childhood friends all while trying to contain a demon inside her. Sounds like a recipe for disaster.

Based on the legend of Mae Nak Phra Khanong, Nang Nak tells the story of Mak, who returns from war to his pregnant wife and daughter. Little does he know that they have died months earlier. The villagers tell him the truth, but it’s going to take more than words for him to believe them.

A family is excited to move into an upscale neighbourhood with lush outdoor lawns and stylish homes. However, they discover that life in the new community isn’t as posh as it seems. Laddaland debuted number one on the charts because it’s rumoured to be based on a haunted condo in Chiang Mai.

Abel has been adamant about the supernatural sightings around her house, but no one believed her. Years later after the death of her parents, she and her sisters revisit the family home to understand more about the stories Abel has been talking about.

Many scary movies on Netflix have a family twist to them. But perhaps none is as gripping and terrifying as May The Devil Take You. The premise goes like this: Two sisters visit their estranged father on his death bed only to find out he had a pact with the devil. The curse is generational and the only way to break it is through drastic measures. Don’t forget to check out the sequel after you’re done!

Adapted from a bestselling novel, a little girl befriends three spirits in the absence of her wealthy parents. Things take an awry turn in this Asian horror movie when the spirits try to take her to the other side.

The Call isn’t a horror movie per se, but this time-bending thriller will still send chills down your spine. The story revolves around a phone call connecting two women—one in the present, the other from two decades ago. The agenda? To stop a brutal murder from transpiring.

A vengeful spirit looking to unleash hell. A former exorcist. Seven mortals to possess. What could possibly go wrong in this Netflix scary movie? In The 8th Night, there’s quite a lot. And in the battle between good and evil, casualties are always guaranteed.

A slow burn religious-themed horror piece, Svaha: The Sixth Finger puts a pastor and a monk together as they investigate a series of murders tied to an underground cult. The film also taps into religious fundamentalism, which will leave viewers with much to ponder about.

Before Parasite took the world by storm and won Best Picture in last year’s Academy Awards, director Bong Joon-ho explored the monster horror genre with The Host. The film centres around a monster that emerges from the Han River to terrorise the city. It ends up kidnapping a girl, reeling her family into a desperate race to save her life.

Motorists mysteriously die from making illegal U-turns at a particular road, leading to nationwide coverage by a struggling journalist. After her brother faces the same fate, she finds out that something ominous is lurking around the corner.

As if the title isn’t obvious enough, Eerie focuses on a guidance counsellor who uncovers the school’s abusive past after a suicide that sparked supernatural events. Asian horror movies set in schools are often chilling and somewhat relatable, and Eerie is no exception.

Roh doesn’t count on jump scares and in-your-face scenes to disturb you. It’s not a conventional horror flick,  but the supernatural themes stay with you long after the credits have rolled. Earmarked as Malaysia’s official submission for the 93rd Academy Awards in the Best International Feature Film category, Roh is the pinnacle of Malaysian horror.

Shot on location at the house of the same name, Villa Nabila is a documentary-style horror film exploring the stories and tales behind the abandoned villa in Johor. If you’re curious, the abandoned structure that once held Villa Nabila still stands. Probably not a good idea to check it out, if you ask us.

These Asian Horror Movies Will Keep You Up At Night

If you’re looking for alternatives to Western horror, this list of scary movies on Netflix proves there are plenty of Asian options! Whether you’re in the mood for a supernatural adventure or a slasher-thriller to keep you at the edge of your seat, you’re bound to get a good fright! Not so much of a horror fan? Maybe try binging on these must-watch Korean shows. Don’t forget your snacks as well; movie night isn’t complete if you have nothing to munch on!