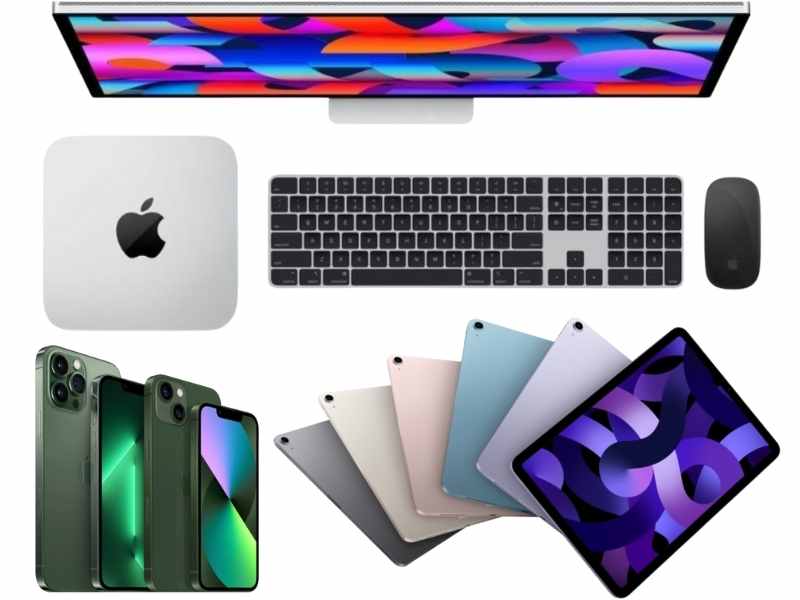 Apple returns with another March event to introduce even more new hardware. This year, it is a huge one. From a new desktop computer to a new tablet, the Cupertino company is certainly not pulling any punches early in the year. While the next flagship iPhones won’t surface until the later half 2022, there are still some updates to keep iPhone fans happy and in anticipation. Let’s jump right into the biggest announcements that will be talked about for days and weeks ahead!

New iPhone SE Comes With A15 Bionic Chipset And 5G

The iPhone SE brings up-to-speed performances on par with the flagship iPhones but comes with a much more palatable price tag. Much like the 2nd-gen iPhone SE released in 2020, the new model that got on stage during the Apple March event is equipped with Apple’s current fastest mobile chipset in an iconic legacy design with TouchID fingerprint sensor. It offers up to 1.2x faster graphics performance and up to two hours more video playback time than its predecessor. Oh, and it also gets 5G support.

The all-new iPhone SE represents great value and is the iPhone of choice for those with a lighter wallet.

Pre-order starts on March 18, and the phone will be available in stores from March 25 onwards in Midnight, Starlight, and PRODUCT(RED) colour options.

The purple iPhone 12 introduced in the previous Apple March event in 2021 sent many hearts fluttering. Therefore, it is no surprise to see Apple repeating the trick of releasing a new colour option in the iPhone lineup mid-cycle. Rejoice, green lovers!

iPhone 13 Series In Green Price And Availability In Malaysia

There are no price changes to all the new models. They will be available for purchase beginning March 25, and you can pre-order one on March 18.

iPad Air Catches Up With The iPad Pro

The next time you buy an iPad, you aren’t just limited to the iPad Pro models if you want the absolute best performance. Apple is bringing the M1 chipset to the new iPad Air, which also gets 5G support and Centre Stage feature on the front camera that comes in super handy when you are doing video calls or creating your TikTok masterpieces.

And what’s a new iPad without some fresh coat of paints? The latest iPad Air is adorned in new Blue, Purple, Pink, and Starlight accents in addition to the regular Space Gray.

There will be some waiting to do as Apple hasn’t detailed a release schedule for these new iPad models.

Every once in a while, Apple would introduce a completely new product that would cause ripples in the tech industry. The latest Apple March event features not one but two such products. The first, Mac Studio, is Apple’s most advanced desktop-class computer yet—powered by the also-newly-announced M1 Ultra chipset.

Long story short, the Mac Studio delivers exceptionally fast performance never before seen since the groundbreaking introduction of the M1 chip. Apple billed it as “the most powerful chip ever in a personal computer”. Feel free to head over to Apple’s website to gawk at all the glorious numbers if you need more convincing.

No doubt the Mac Studio packs some hefty power in its small enclosure. But be forewarned, it arrives with some pretty hefty price tags too.

The Mac Studio will come to Malaysia later this year.

More than two years after the Pro Display XDR made people gasp, Apple is back in the standalone monitor business with the brand new Studio Display. It is a 27-inch 5K monitor equipped with an ultrawide webcam with Centre Stage and six speakers delivering immersive sound with Spatial Audio.

The Studio Display works great with any MacBook and Mac system. And with the Studio branding, Apple wants you to know that it goes perfectly well with the Mac Studio. Hey, at least it is a heck lot cheaper than the ridiculously-priced Pro Display XDR!

The Studio Display will come to Malaysia later this year

Apple events are always a highlight thanks to the great presentations and slick production. For those who couldn’t stay up in the wee hours to tune in to the live proceedings, you can watch the one-hour broadcast here!  With the Apple March event now done and dusted, the clock resets for the next Apple showcase in June 2022.