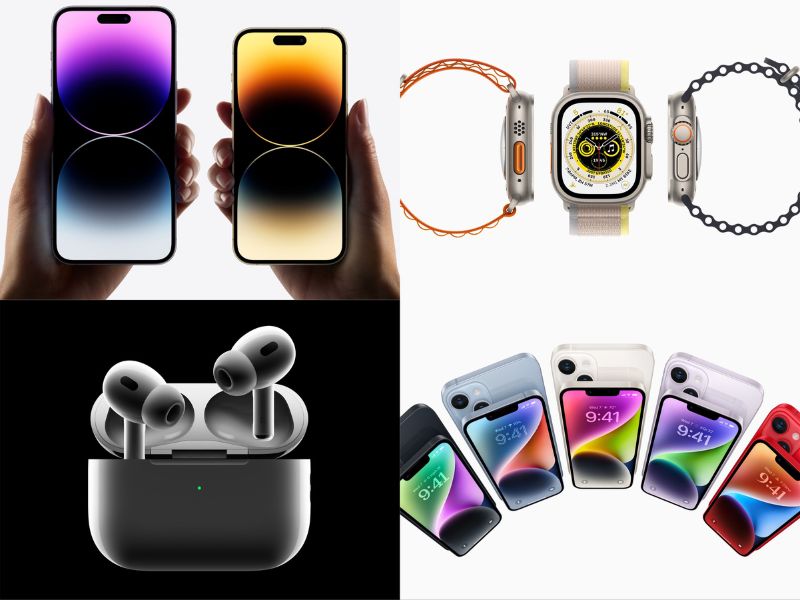 Tim Cook and co. took to the stage once again for the third time this year to present their latest round of announcements. The Apple September event 2022 is the most exciting one yet in terms of new hardware drops. Sure enough, there is an avalanche of new Apple products that will set the benchmark in the consumer tech world for the next one year, led by brand new iPhones. Here’s a rundown of the all-important announcements you need to know, or else you’ll be left out of conversations in the days and weeks to come!

What Was Announced On Stage During The Apple September Event 2022

In total, Apple has unveiled eight pieces of hardware! From iPhones to AirPods, there is plenty to dissect from the Apple September event 2022. Let’s go over them one by one.

It was the end of a short-lived era for the iPhone mini. After a two-year run, Apple has sunsetted its smallest flagship phone and replaced it with a “Plus” model (not seen since the iPhone 8 Plus). The iPhone 14 Plus features a 6.7-inch display (the same as the Pro Max models). Together with the iPhone 14, they bring better low-light photography, better selfies, and a new Crash Detection feature which can detect a severe car crash and automatically call emergency services besides notifying the user’s emergency contacts.

But the biggest upgrades are reserved for the Pro models. Not only do the iPhone 14 Pro and iPhone 14 Pro Max get the newest A16 Bionic chipset and 48MP main camera (the non-Pro models are given last year’s A15 chip and still use a 12MP main camera), they also offer users new ways to interact with an iPhone.

Dynamic Island is the star feature which blends hardware and software to give the much-maligned notch a “life” of its own. The new pill-shaped cutout can now expand to different sizes to show activities, alerts, and notifications to users, and it is also interactive. And then there’s Always-On Display, a long-awaited feature that permanently displays vital information in a dimmed-down state on the lock screen.

The persistent rumours of a new “rugged” Apple Watch catered for extreme sports enthusiasts can finally be put to rest. Say hello to the Apple Watch Ultra! The soaped-up Apple Watch features all the design and hardware components made to reinforce the smartwatch to survive the harshest of outdoor environments.

These include a titanium case, precision dual-frequency GPS, water resistance up to 100m, specialised straps, and a battery life that can last up to 36 hours. There’s also a new customisable Action button that gives users quick, physical control over various functions.

It joins the new Apple Watch Series 8 and the second generation Apple Watch SE that were also announced during the Apple September event 2022. Apple Watch Series 8 brings incremental upgrades over the Series 7 with the new Crash Detection feature and temperature sensing to give female users a better understanding of their menstrual cycle.

Meanwhile, the 2nd-gen Apple Watch SE packs in a faster processor over its predecessor and Crash Detection while retaining its more affordable price tag.

At the core of all the new features is the brand-new H2 chipset, bringing a richer audio experience, up to two times more noise cancellation than the original AirPods Pro, and Adaptive Transparency that minimises the intensity of loud noises to protect the user’s hearing. You can now use the new wireless earbuds for up to six hours of listening time with ANC enabled (and up to 30 hours with the case).

While the earbud’s design hasn’t changed, the stem now has added control to adjust the volume by vertical swiping. And speaking of design, the upgraded charging case now comes with a lanyard loop and a built-in speaker to make locating it via sound alerts easier.

Here are the official prices in Malaysia and release dates for all the new Apple hardware from the September 2022 event.

iPhone 14 Plus price in Malaysia (Pre-order from 16 September, available 7 October)

You can purchase all of the above from authorised Apple resellers such as Machines, Switch, iTworld, senQ, and TMT Thunder via their official e-stores on Shopee Malaysia.