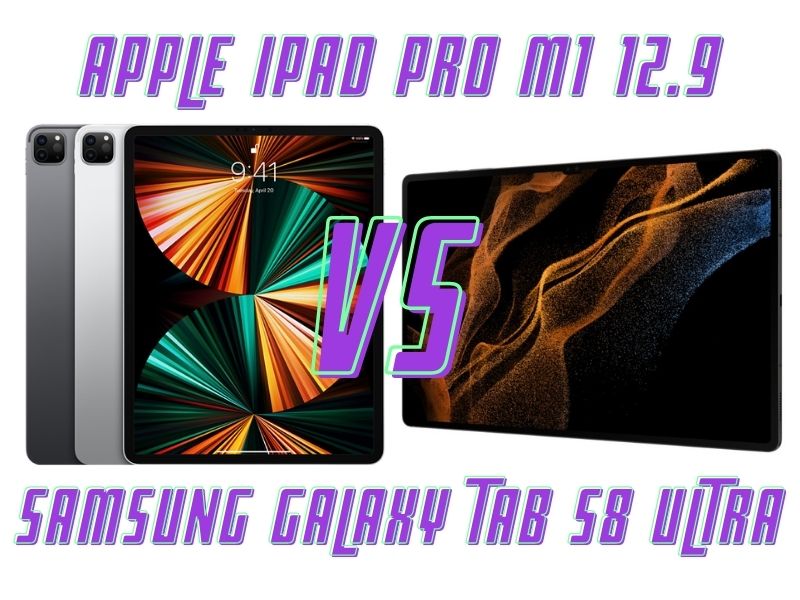 The competition in the flagship tablet space isn’t as crowded as the flagship smartphone market. In the latter, spoilt for choice is an understatement. However, there are only two real options if you want the highest-end tablet with all the bells and whistles—you either get an iPad, or a Samsung Galaxy Tab. In 2022, the competition comes down to the iPad Pro M1 12.9-inch vs Samsung Galaxy Tab S8 Ultra. If you have the money to spare on the ultimate flagship tablet and are considering your options, which side should you place your bet on? Let our guide here help clear your uncertainties!

Both are giant tablets that can be made as laptop replacements. But the Galaxy Tab S8 Ultra edges the size competition here as it features an unconventional 14.6-inch display—a territory where no flagship tablet has ever gone before.

You will have a more enjoyable experience watching YouTube and Netflix on the Galaxy Tab S8 Ultra. The larger canvas is also awesome for drawing and illustrating with a stylus.

On the flip side, the iPad Pro M1 12.9-inch has a better overall display quality. It features the new mini-LED technology that offers superior brightness and Dolby Vision, which is currently the most advanced HDR format on any display.

Performance should be the least of your concern here as both tablets absolutely fly with the latest and most powerful chipsets in the industry. You won’t be bogged down by performance issues on either tablet, that’s for sure.

The iPad Pro M1 12.9-inch triumphs in performance hands down.

It is safe to say that a sizable number of people who are shelling out this much money for either tablet do not intend to use it solely as an entertainment device. With the right set of accessories, they can do most things that a laptop can in getting work done.

While both tablets are the closest thing to a laptop replacement, the Galaxy Tab S8 Ultra might be the smarter choice here. It sports a better quality (and better positioned) front-facing camera for better-looking video feeds. Then, there’s also Samsung Dex, which brings up a desktop-like interface for those who want a more multitasking-friendly environment to work with.

If illustrating and taking handwritten notes are part of your workflow, both tablets offer unrivalled stylus performances. You will get better value with the Galaxy Tab S8 Ultra as it comes bundled with the S Pen. The Apple Pencil, meanwhile, is a separate purchase that would further pile on the already astronomical tablet cost.

The Galaxy Tab S8 Ultra offers better overall value as you will not only be getting an S Pen but also a Book Cover Keyboard (free with purchase at time of writing) at no extra cost.

A device is as good as while it lasts. Hence, battery life should be among the top considerations when shopping for a tablet. Those familiar with iPads will know that robust battery life is one of their strongest features, and the iPad Pro M1 12.9-inch is no exception. You can expect it to last the entire day, even under heavy usage.

The Galaxy Tab S8 Ultra, too, can soldier on throughout the day. However, the need to power a much larger display means it may run out of juice quicker. Moreover, the Android operating system is also not as power-efficient as iPadOS. On the contrary, it does offer a much faster-charging speed at 45W, so it (theoretically) should spend less time on the charging table.

The iPad Pro M1 12.9-inch is the safer bet if you want reliable battery performance.

Beyond the core features, it is also imperative to look at the tablets as a whole when making an informed buying decision. Here’s how they stack up head-to-head.

On the other hand, Samsung is only offering the Galaxy Tab S8 Ultra in 256GB configuration in Malaysia, and it retails for RM5,899. For comparison’s sake, the equivalent 256GB iPad Pro model is not too far away with an RM6,149 price tag.

Related: Have Around RM1,000 To Spend On A Tablet? These Three Are Your Best Options