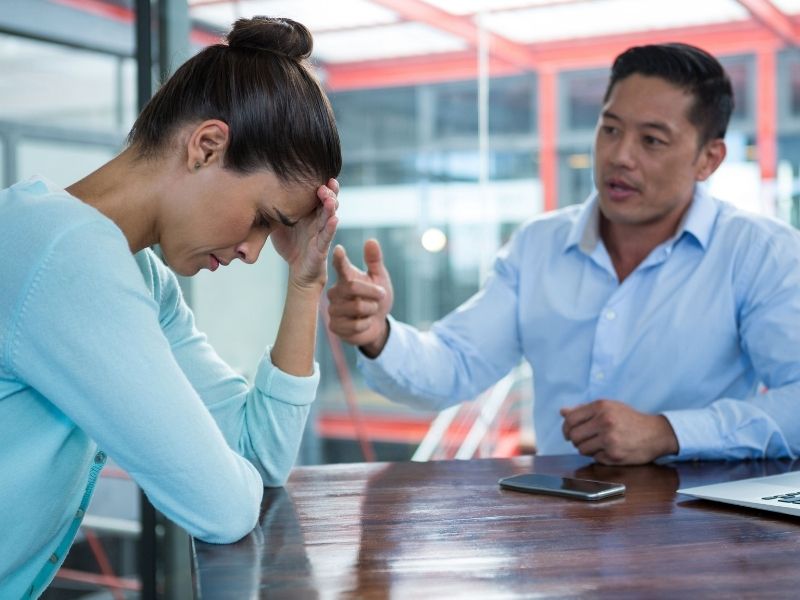 Toxic relationships are unfortunately a common occurrence; it can stem from partners, friends, parents, and even colleagues too. There are times when we’re victims of toxic people and sometimes we’re the perpetrators of toxicity to others ourselves. To clarify the definition, toxic relationships are when there’s a lack of mutual trust, respect, and unity between the people involved. These relationships are often emotionally draining, causes an unhealthy amount of stress, and is constantly putting you down. Here are some telltale signs of a toxic relationship you can look out for.

Signs Of A Toxic Relationship With Your Partner/Spouse

If you feel like your every action (who, what, why, when, and where), is being governed by your partner, then there’s a chance they may have some possessive tendencies. No matter what romantic dramas have told you, these are clear signs of a toxic relationship you should not look for nor tolerate in your significant other. Their passive-aggressive gestures are often veiled as endearing “concerns”.

They make it seem like they’re only looking out for you and guilt-trip you into feeling you’re the one in the wrong when you’re really not. For example, not allowing you to go out with parents or friends while turning you into a villain for not spending enough time with them. Their love is conditional and they keep track of every little “favour” so that you always owe them something.

Lies are one of the biggest signs present in most toxic relationships. This is a major red flag because it weakens the trust you have for each other and you’ll never know when they’re being truthful towards you. It also shows that they hold no respect for you as a person either.

Yes, we admit, telling (as well as hearing) the truth can be hurtful to the other person at times. However, that still doesn’t make lying any more acceptable. If your partner genuinely values you and the relationship, they wouldn’t risk ruining it with frequent dishonesty. It can also create a huge strain on your interactions as you’ll be looking out for any slip-ups and second-guess their statements at every turn.

Signs Of Toxic Relationships Between Friends

With this friend, the whole world practically revolves around them. They’re always taking from you, both materially and emotionally, but without reciprocating and giving you nothing back in return. This friend finds a way to somehow turn the conversation around to themselves. However, when it’s their turn to listen, they’re suddenly too busy.

It’s hard to feel supported in this friendship when you’ve been investing so much effort in them, but they don’t do the same for you. Every good friendship has to have somewhat equal levels of giving and taking. So, if they’re only friends with you when it’s convenient and quickly leave you when you’ve served your purpose, it’s time to move on. These are signs of your relationship turning toxic, and it’s time to reevaluate their presence in your life.

You can never share any secrets with this friend because you know the moment you do, it’s going to get leaked out even when they “promised not to tell”. They’re the ones who always seem to have the juiciest drama, collecting dirt on anyone and everyone. Spilling the latest “tea” and being involved in gossip seems to be a thrill they thrive on constantly.

It’s good to remember that if they’re gossiping about their other friends to you, then chances are they’re gossiping about you behind your back. While it’s inevitable for gossip to slip in the conversation from time to time, it shouldn’t be the main focus of all your conversations. Gossiping is a sign of a toxic friendship that can hurt the relationship significantly.

Signs Of Toxic Relationships Between Parents And Kids

Being overly critical is one major sign of toxic parental relationships. Some parents want to bring out the very best in their children, and they think showing tough love and being critical is the way to do so. However, this will only show the child that their parents are never satisfied with whatever they do or say. So, as a result, these kids will always feel on edge for fear of messing up.

They may develop severe self-esteem issues that could also lead to depression and anxiety later on. In the worst-case scenarios, overly critical parents can push their child towards self-destructive tendencies, which will follow them through to adulthood. So, it’s good for parents to remember that while it’s important not to coddle your child into becoming too sheltered, it’s crucial to not be too overly critical either.

Making The Kid Responsible For Their Happiness (Or Lack Thereof)

There’s nothing wrong with making a few sacrifices to put your child first, but like everything else in life, moderation is key. Parents may often feel guilty and feel the need to put aside their own wants and happiness for the sake of their children. However, always making those sacrifices will eventually place a toll and rob you of the joy of parenting.

Some parents may start to feel some form of bitter resentment towards their children because of this. They will then start blaming their kids for not appreciating all that they’ve given up for them. It places an immense burden on the child, setting unrealistic expectations to bring them happiness to make their sacrifices “worth it”. Mind you, this can persist even into the child’s adulthood.

Signs Of Toxic Relationships Between Colleagues

Taking The Credit For Work They Didn’t Do

Everyone has that one friend in university who never contributes to the group projects, and only shows up on presentation day to get the credit. Well, unfortunately, that person exists in the workplace too, and worse, as your colleague. This person never gets their side of the work done, but knows how to talk their way out of trouble and somehow get rewarded for it. They make sure to be present when they need to be seen while stealing the rest of the team’s efforts and ideas to play off as their own. These credit-takers know how to make it seem like they were the “responsible” ones who lead the group, even though they weren’t.

Backstabbing To Move Higher Up The Corporate Ladder

This is the sign of a toxic co-worker relationship that you need to be wary of the most. With the backstabber, they’re usually not befriending you out of genuine interest. Most of the time, they’re just looking out for your flaws, so they can tell the boss how poorly you’re doing. Hence, why they’re extra diligent in digging up dirt you may have to use it against you.

They do this all while painting their own image as the perfect, hard-working employee who could do absolutely no wrong. The backstabbers wrap themselves up in office politics, stroking the higher-ups’ egos, and whatever else it takes to “win the game”.

If you’ve noticed any of these signs of toxic behaviour in your relationships, then take the time to reflect on whether you really need these people in your life. We understand that moving on from relationships is extremely difficult, but sometimes that’s exactly what you have to do. Your happiness comes first, and you shouldn’t feel guilty for breaking off certain relationships to be in a healthier state of mind. At the same time, if you find that you’ve exhibited these toxic behaviours yourself, be sure to reevaluate yourself and what needs to be changed. No one is perfect, but what matters is how we go forward in learning from our mistakes!