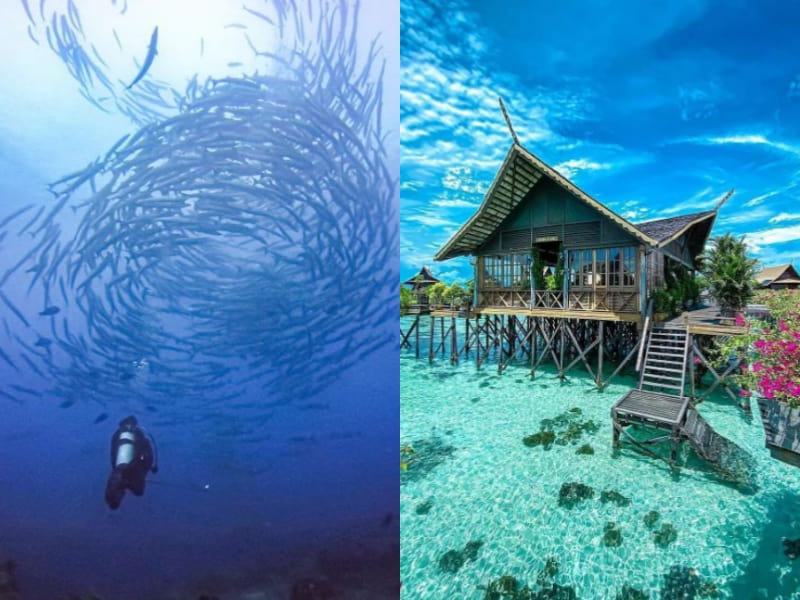 Sabah’s many islands encapsulate the ideal beach destination: clear waters, poster-worthy beaches, and stunning marine life. Accessible off the coast of Kota Kinabalu, these islands are also home to Southeast Asia’s most exciting diving spots, with common sightings of healthy corals, barracudas, pelagic, turtles, and even whale sharks! Save yourself the plane ride to Bali or Boracay, slather on some sunscreen, and check out these best islands in Sabah for your next beach escapade.

How Many Islands Are In Sabah?

Out of the 878 islands under Malaysia’s governance, nearly 400 of those are found in Sabah. That’s almost half the number, though only a handful of them have been developed for tourism! Sabah’s islands are dotted along the Coral Triangle, often recognised as the global centre of marine biodiversity spanning Indonesia, Malaysia, the Philippines, Papua New Guinea, Timor Leste, and the Solomon Islands.

The Best Islands In Sabah For Your Next Sandy Holiday

The renowned Sipadan Island is kicking off the list, an oceanic archipelago where admiring schools of barracudas moving in a vortex formation is commonplace. No wonder it’s always touted as one of the best islands in Sabah! Home to a rich marine ecosystem, Sipadan sees an unusually large number of green and hawksbill turtles as well as hundreds of coral species. The island used to hold accommodations and was freely accessible by tourists. But due to environmental degradation, Sipadan today only does day trips, limited to 176 passes per day.

Beautiful and secluded, Mataking Island holds many attributes of the ideal getaway for both the avid diver and casual tourist: sparkling white sand, mesmerising blue waters, lush greenery, a top-class resort, and an underwater post office. Although seclusion and exclusivity are two main attractions of the island, it’s only a 45-minute boat ride off the coast of Semporna.

If you’re going island hopping in Kota Kinabalu, Mantanani Island is a mandatory stopover. Made up of three separate islands, tourism mostly takes place in Mantanani Besar where you’ll get to cruise on sandy beaches on ATVs or catch up on reading in a cosy hammock. But if the sea is calling out to you, don’t hesitate to put on a wet suit and go for a dip. Diverse marine life and age-old shipwrecks are likely encounters, but you might just see a dugong if lady luck is on your side.

Rustic stilted resorts with private pathways leading to the crystal clear waters below. Kapalai Island bears an uncanny resemblance to the Maldives. However, Kapalai isn’t an island in the conventional sense of the world—it’s actually a sandbank in the middle of the Celebes Sea. Still, this floating paradise is always part of the conversation when talking about the best islands in Sabah, and it’s easy to understand why.

Don’t let its Survivor Series past scare you—though we have to inform you that it’s a known breeding ground for venomous sea snakes—Tiga Island is actually a serene sandy paradise of clear waters, stunning sunsets, and volcanic mud spas. Avid divers can expect to get up close with a plethora of marine life, ranging from whale sharks to marbled stingrays. Meanwhile, casual snorkelers aren’t left out as tropical fishes and colourful corals are aplenty off the coast.

Though smaller in stature as compared to the sprawling Gaya Island next door, Sapi Island offers significantly more adrenaline-filled activities. The main attraction is undoubtedly the Coral Flyer, the longest island-to-island zipline in the world spanning over 250 metres. Besides, there are other fun pastimes like tumbling out of a banana boat or taking in the scenery while paragliding that are worth checking out.

A premier island-hopping destination due to its close proximity to Kota Kinabalu, Gaya Island is home to the luxurious five-star resort Gaya Island Resort. Set amidst lush greenery with breathtaking views of the shoreline, the resort is one of the main reasons why holidaymakers mark Gaya Island as one of Sabah’s best. As part of the Tunku Abdul Rahman Marine Park, you’ll also get quick access to world-class diving facilities.

Just a quick 15-minute boat ride from Jesselton Ferry Terminal, Matumik and Manukan Islands are the dynamic duo of the Tunku Abdul Rahman Marine Park, drawing hordes of island hoppers from busy Kota Kinabalu. And despite being located next to the state capital, the waters at both islands are pleasantly clear and pristine.

The archipelagic lines of Semporna are dotted with palm-lined beaches, one of which is Bohey Dulang Island which makes up the Tun Sakaran Marine Park. Shaped by the remnants of an ancient volcano crater, the island offers a stunning vantage point atop 353 metres overlooking a distinctively curvy lagoon. The marine life is expectedly plentiful, but the island’s mountainous terrain is also home to colourful avians like pied hornbills and partridges.

When the concrete jungle gets too overwhelming, bailing to a sunny island can do wonders for your weary soul. And if you’re wondering where you can dip your feet into see-through waters and swim next to vivid marine life, the best islands in Sabah are a good place to start. Not an island person? Why not try camping in the alluring forests of Klang Valley?